I have always loved creating clothes. Even when I was a little girl, I dreamed of being a fashion designed and making it big somewhere in a big city. Today, you can definitely say that my dreams have come true. I have had nothing but mostly positive feedback from the clothes I have designed in my lifetime. By the way, my name is Judy and I’m from Italy. In Italy, there are a lot of very well known fashion designers that people like me admire on a daily basis, but the one thing I wanted more than to meet them, was to top their trends in clothing that went throughout the country and beyond. I wanted to make a name for myself and prove that I wasn’t just a student in school majoring in fashion design. I wanted to be that girl that went all the way to become someone, and this is my story. 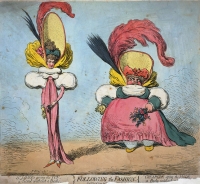 “Following the Fashion” a December 1794 caricature by James Gillray, which satirizes incipient neo-Classical trends in women’s clothing styles, particularly the trend towards what were known at the time as “short-bodied gowns”

for me and my siblings because we couldn’t afford to always get new clothes. I eventually picked up this hobby, and began to really love it. At such a young age I began mixing colors and patterns together to make very bold pieces. I never wanted to play it safe. Kids at school started noticing me and knew that I was different, but they accepted me. Soon, I had other kid’s parents calling my mom to see if I could make them clothes as well. My mother at first objected as she didn’t want me to feel overwhelmed when I was just a kid at the time, but I assured her that I loved doing what I did, and I would love to make an additional one or two pieces a week for somebody else to enjoy my work. So once it began, little girls began wearing stylish dresses to school and I even made a few pieces for some fellow male classmates. I had a very edgy look to my designs. I liked to make people stand out, so they looked classy and mysterious. Even today, my themes are all around the same area.

But moving up to college, throughout those years leading up, I was improving every day with my fashion ideas. But throughout high school, I wanted to do something more with myself. I was very well known in my town for my pieces, but I wanted people to know me for my work outside of the city limits. So I entered myself into a fashion design contest. It was the first contest they were having in my city that wasn’t during school hours so I could finally participate in it. The competition was tough, but I had been sketching ideas for months preparing for it. I wanted to show these judges that I wasn’t going to play it safe and simple with my designs, I was going to bring my most bold designs that I had never made yet. In the end, I won the entire competition and won for my age group. It was the most amazing feeling I have ever felt, and I couldn’t have been more proud of myself. My mother and siblings were thrilled, the same as my friends.

With that win, I was able to meet some of the top fashion designers in my country. And with that, they were so impressed by me, I got signed for a contract to design clothes and have them be sold in stores. I was 18 at that time. I designed once again some very unique pieces that would have people turning heads wherever they went. I had men’s clothing with jackets with blasting colors and unique cuts and bold buttons running down the sleeves, I had women’s dresses cut low in the back and draping in the front with an elegant lace, I had slacks that would flare in the middle of the pant. I made everything nobody expected to be a trend in Italy, but once they hit stores, people were buying my clothes every minute they could get. They would even be buying clothing that wasn’t even for the season that it was in. Males, females, young adults, older women, they were all intrigued by my look that I had put out.

With my fashion win at the contest, I was only supposed to share lunch with a few top designers. But showing them my sketchbooks and some of my fashion designs that weren’t even expected of me to bring, they fell in love with my work and my fierce attitude as well. They knew that I was holding the next big trends in my sketchbooks, and they weren’t going to risk losing me.

A year and a half after I won the contest and all of my work was out for the prior season, I was amazed just doing daily tasks throughout my day. I would go to the grocery store and see my fellow citizens dressed in the clothing that I took weeks to design. I was waited on at lunch at a café by a woman wearing a scarf that had a tag with my name on it. People had come up to me and asked if I was Julia, the new fashion designer that had made all of these new trendy outfits. I was in some way a celebrity now, more than I ever was before. Before I knew it, my fashion trends were not only blooming in my city, but they were growing in the bordering cities, and even in other countries. I began drawing sketches to be made in other countries on a monthly basis, and my name was on billboards advertising my work.

The World Of Fashion Designer

Now being a college student still wanting to improve every skill that I already had, I was famous in the world of fashion designer. I was so young, yet Italy saw something in me. I brought new fashion trends to my country and beyond, where even today I still see my clothes everywhere I go, and I continue to make more designs to be made. I made a name for myself with these fashion styles, and all I focus on now is thinking of ways to come up with the next big trend.